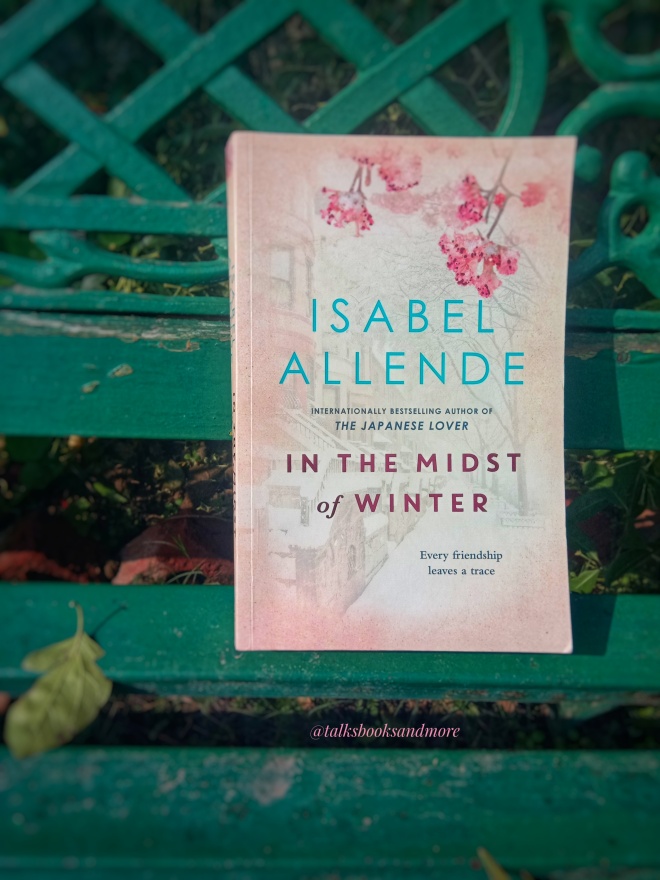 In the Midst of Winter by Isabel Allende

New York Times and worldwide bestselling “dazzling storyteller” Isabel Allende returns with a sweeping novel about three very different people who are brought together in a mesmerizing story that journeys from present-day Brooklyn to Guatemala in the recent past to 1970s Chile and Brazil.

In the Midst of Winter begins with a minor traffic accident—which becomes the catalyst for an unexpected and moving love story between two people who thought they were deep into the winter of their lives. Richard Bowmaster—a 60-year-old human rights scholar—hits the car of Evelyn Ortega—a young, undocumented immigrant from Guatemala—in the middle of a snowstorm in Brooklyn. What at first seems just a small inconvenience takes an unforeseen and far more serious turn when Evelyn turns up at the professor’s house seeking help. At a loss, the professor asks his tenant Lucia Maraz—a 62-year-old lecturer from Chile—for her advice. These three very different people are brought together in a mesmerizing story that moves from present-day Brooklyn to Guatemala in the recent past to 1970s Chile and Brazil, sparking the beginning of a long overdue love story between Richard and Lucia.

Exploring the timely issues of human rights and the plight of immigrants and refugees, the book recalls Allende’s landmark novel The House of the Spirits in the way it embraces the cause of “humanity, and it does so with passion, humor, and wisdom that transcend politics” (Jonathan Yardley, The Washington Post). In the Midst of Winter will stay with you long after you turn the final page.

Isabel Allende Llona is a Chilean-American novelist. Allende, who writes in the “magic realism” tradition, is considered one of the first successful women novelists in Latin America. She has written novels based in part on her own experiences, often focusing on the experiences of women, weaving myth and realism together.

Isabel Allende keeps her writing contemporary this time, veering far away from the magical realism that she writes with great flourish. However, this Allende book features relevant and complex themes revolving around three main protagonists: the exploitation of the oppressed, the fate of immigrants in America and the question of justice. There are also subtle subtexts: the idealism of youth that gets defeated over time beaten down by the violence of the order of things around them, the way relationships meander and get snuffed out. Towards the end of the book, there is an attempt to bring in the question of what is justice though that looks more like an after thought.

‘In the Midst of Winter’ starts on an extremely cold note (literally) in the middle of a snowstorm in Brooklyn and while the ravages of nature happen on outside, three different people are forced by circumstances to share the same space which leads them to look at their life journeys. Richard Bowmaster, a human rights scholar at NYU and his tenant, Chilean Lucia Maraz, a visiting professor who teaches Latin American and Caribbean studies and Evelyn Ortega, a young undocumented worker from Guatemala whose life is a series of harrowing experiences. Of the three, Richard and Lucia are in their early 60s and I must say, that it is a refreshing plot device to look at things and situations from at an age where there is a lot happening.

Allende takes readers to varying landscapes through the life experiences of the three protagonists – politically, culturally and historically through Chile, Gautemala , Brazil while bringing readers back to what is unfolding in Brooklyn where the situation is fraught not just because of the weather but a situation that is spiralling out of control for the placid, set in life Richard.

There is some amount of drama and pathos in this book but it must be said that if you go in to this book expecting Allende’s earlier style of writing, you might end up disappointed. However, if you treat this book without the weight of Allende’s earlier works, the sweeping setting, the pathos and the back-stories of the characters may just leave a lump in your throat.